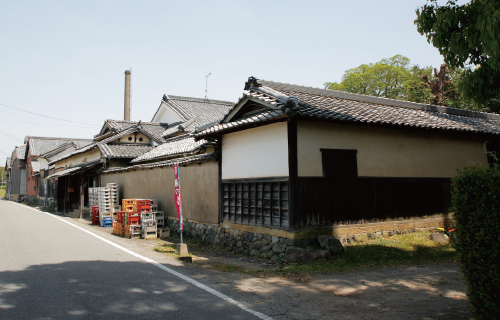 Kanzaki Shuzo was founded in 1875. Its roots lie in the cultivation of ginseng, started by the Himeji Domain as part of its financial reform. The ancestors of the current head of the brewery were dispatched to the office of ginseng, established to help improve cultivation techniques, and worked as medical personnel. Later, after the office of ginseng was burned down during a peasant’s revolt, it is said that they started up the first sake brewing industry in the country using sake brewer’s rice from the Harima area.

At the time of its founding, Kanzaki Shuzo was called “Okaniwa Shuzoten.” The brewery’s sake production was going smoothly, but around end of the war it was forced to close due to food shortages. After the war, it reopened under the name “Kanzaki Shuzo,” a combination of three sake breweries from the same area, and operations continue to this day.

The brewery’s representative brand, “Manai no Tsuru,” has been carefully crafted for generations and features a smooth, refreshing taste. It is a timeless brew, beloved by locals as their daily evening drink. Located in front of the brewery’s warehouse is Japan’s first highway, originally called “Gin no Bashamichi” or “silver carriage road.” As part of the brewery’s efforts to build up attention for the highway as a tourist route, they are also selling a variety of Junmai-shu called “Gin no Bashamichi.” 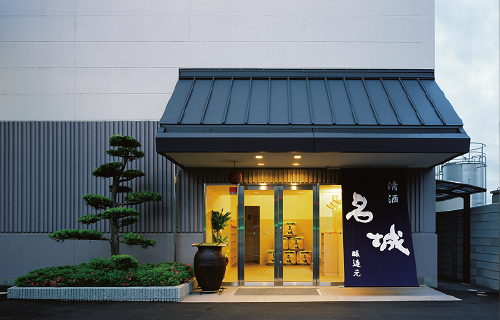 Meijo Shuzo was established in 1966. A total of six breweries from Himeji City merged around Imai Shuzo, founded in 1864, and the resulting entity was named “Meijo” after Japan’s famous Himeji Castle.

The most unique aspect of Meijo Shuzo is that it is a year-round brewery, which does not take breaks from brewing during the hot seasons. Using a computer-controlled dehumidifying and air conditioning system, they are able to produce consistent, high-quality sake year-round.

On the other hand, they do use the traditional “hako koji zukuri,” or box koji method, of brewing for important processes such as koji production for daiginjo-shu. Sparing no effort and not using any machinery, instead the brewery relies on the head brewer’s experience and intuition. Meijo Shuzo’s true strengths lie in its balanced fusion of mechanization and the pros of traditional brewing techniques.

Taking mass production to its opposite extreme, “Meijo Junmai Kakushizake” is an unfiltered raw brew, which is fresh pressed sake that is not filtered, heated for sterilization, or diluted. It is not distributed to general retailers, but it is gaining popularity exclusively word of mouth, and many people look forward to its sale every year.

A brewery with a female lead, toji, striving to produce sake perfect for mealtimes 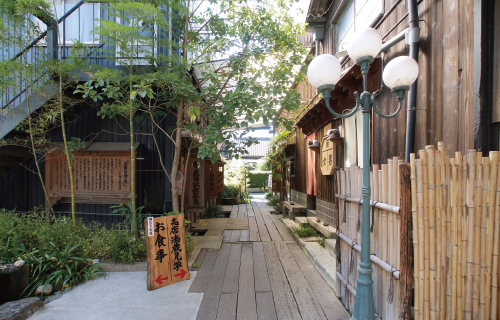 Nadagiku Shuzo was founded in 1910. Their sake brewing follows traditional methods, made in small 500kg batche per time. Everyone at the brewery gives the preparations their all, resulting in meticulously and carefully brewed sake that can be enjoyed with all five senses. This care is especially present in the final “shibori (pressing)” stage of preparations, in which they utilize the traditional “fukuro shibori”, a bag hanging method, pressing it with a 30-layer horizontal press.

Nadagiku Shuzo is particular about the sake brewer’s rice it uses, carefully selecting local Hyogo Prefecture rice varieties, including Yamada Nishiki, Hyogo Yume Nishiki , and Gohyakumangoku. Their average rice polishing ratio sits around 58%, around the ratio used for ginjo-shu. Their storage and aging processes are performed in small lots of bottles, carefully and thoroughly managing the aging process for each and every bottle.

The heart of Nadagiku Shuzo’s operations is done by a female master brewer, a rarity within the industry. She is the only female master brewer operating in Hyogo Prefecture, the first in western Japan as part of the Nanbu Toji group, and supposedly just the third in all of Japan. Named after her is the brewery’s “Tokubetsu Junmai Misa 33,” which won a bronze medal in the International Wine Challenge 2016’s Junmai-shu category. Furthermore, Nadagiku Shuzo has earned multiple awards at the National Sake Appraisal and the Nanbu Toji Self Brewing Sake Appraising and Deliberating Awards.

Local sake for local consumption, brewed by parent and child 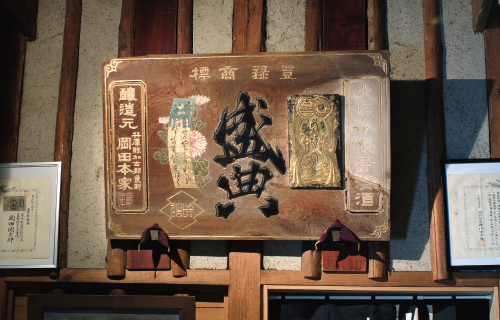 Okada Honke is the meticulous producer of Kakogawa’s famous sake “Seiten,” and it is a long-established brewery founded in 1874. From the 1960s to recent years, most of the production of Seiten was outsourced to major sake brewing companies, but as of 2010 they have revived the Meiji era brand, shifting their focus back to carefully and meticulously brewed Junmai-shu and ginjo-shu.

Aiming to produce regionally-beloved local sake from Kakogawa using local resources, Okada Honke utilizes underground spring water from the Kakogawa River and rice exclusively from Hyogo Prefecture to produce sake with a smooth, refreshing taste. In-house rice paddies grow varieties such as Yamada Nishiki and Gohyakumangoku, and they have developed original sake using yeast from refined salvia flowers in collaboration with the city’s prefectural school of agriculture, all unique initiatives rooted in the region that have drawn attention to the brewery. The warehouse building, built during the Meiji era, also hosts a direct sales shop and an event space, and the brewery is popular as a place to pass down sake brewing culture.

Continuing the traditions and techniques of natural fermentation 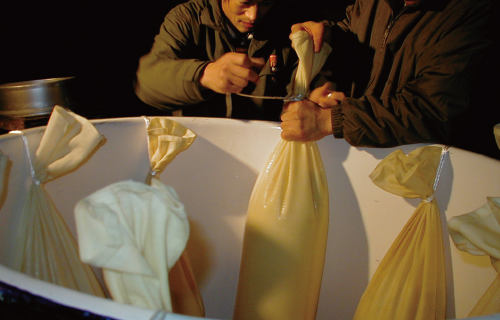 Tsubosaka Shuzo was founded around 400 years ago in what used to be the Kanzaki District. Around the year 1805, during the late Edo period, it moved to its current location around the Yumesaki River’s waters in search of a better environment for itself.

One of the core parts of sake brewing is the preparation of naturally fermented yeast. Tsubosaka Shuzo has adopted a natural fermentation system that carefully controls the room’s temperature solely through opening and closing the entryway door, without needing to incorporate an air conditioning system into the brewery. All of the brewing is entrusted to the climate and topography of the town of Yumesaki, including the natural fermentation of the yeast, but it is said that this temperature adjustment process is the key to mellow-tasting sake.

Tsubosaka Shuzo’s “Junmai Ginjo Seppikosan Muroka Genshu” is the face of the brewery, featuring a well-rounded and pronounced flavor without any sharp sour notes. Apparently, this sake has many fans who appreciate the “original” flavors of sake that you can get through this unfiltered genshu (undiluted sake). However, Tsubosaka Shuzo has also taken upon themselves the challenge to create a commercial sake brew using flower yeast; their “Junmai Ginjo Seppikosan Yume Nadeshiko” features a rounded flavor with aromatic notes that is unique to this type of sake. 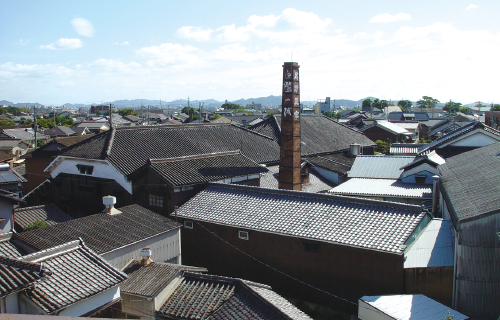 Their sake “Kame no Kou Kotobukikame Shin in” was created from those very beliefs, and it is truly the ultimate junmai daiginjo-shu. It is brewed with a rare type of sake rice called “Kame no O,” resulting in a fruity aroma and flavor reminiscent of wine with a delicate mouthfeel.

They also test a wide variety of rice polishing rates in their sake, hoping to help everyone enjoy the infinite possibilities and appeal of rice. Their sincere passion and brewing skills have earned them a shining reputation, starting with their “Daiginjo Shirasagi no Shiro,” which has won the gold medal at the National Sake Appraisal for 7 years in a row.

Tanaka Shuzojo is constantly challenging itself, including reviving the traditional “Ishigake shiki tenbin shibori” method of sake pressing, staying true to their desire to learn from the past and make it anew. 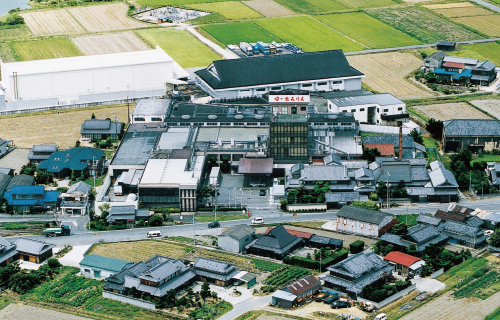 King Jyouzou has its head office set up in Kako-gun’s Inami-cho, an area surrounded with spectacular rural scenery. Founded in 1900 as a mirin and shochu brewery, it has evolved into a seasoning specialist company that leverages brewing technologies to create a variety of products. Among them, their “Hinode Hon Mirin” and “Hinode Shin-Moryo” are long-selling products that can be found on dining tables across Japan. In recent years, King Jyouzou has even established bases overseas in the United States and Singapore, becoming a taste loved around the world as Japanese food booms across the globe.

King Jyouzou begun sake production in earnest in 1993, and currently their sake is produced at two locations. They brew affordable sake that goes down easy, with a focus on their signature product “Banshu Nishiki”. Various size packages are also available, from single cup portions perfect for “a quick cup” of sake, to larger volume cartons that are great for sake to drink at home. The sake has a light flavor with no off aftertaste, making it great served both hot or cold, and it is popular for its ability to pair well with a variety of Japanese, Western, and Chinese dishes.